Setting up a Multisectoral Advisory Committee: a Guatemala case study

Guatemala has strengthened and institutionalised its approach to food and nutrition security through a series of legal and policy frameworks for food security and nutrition. This process began in 2005 when a law was enacted that saw the establishment of the multisectoral coordination system, the National System for Food and Nutrition Security (SINASAN). SESAN (Secretariat for Food and Nutrition Security) is the core structure of the multisectoral nutrition coordination system in the country, operating under the Guatemala Presidency, which also hosts a committee of all ministers as its decision-making body. SESAN is also in charge of overseeing and coordinating the implementation of the National Food and Nutrition Security Policy 2016-2020. 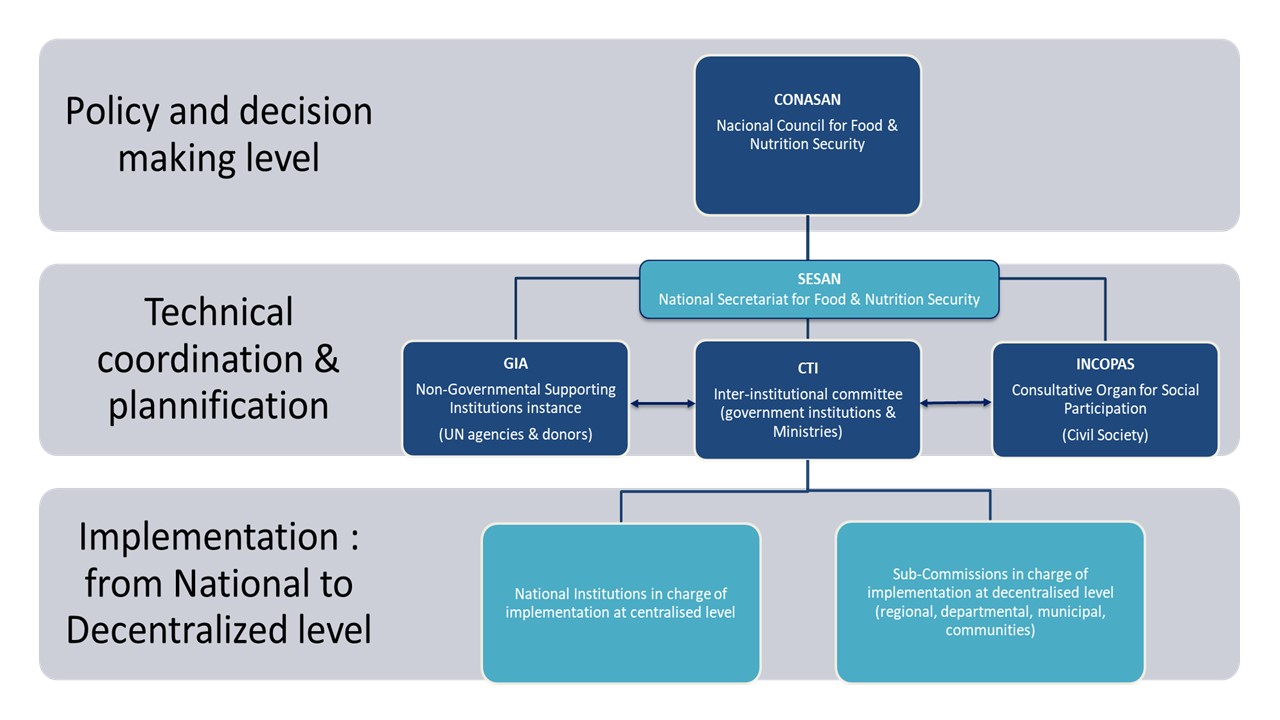 When NIPN was set up in 2017 it was positioned as a key vehicle to support SESAN in tracking and generating evidence on the implementation of Guatemala’s National Strategy to Prevent Chronic Malnutrition 2016-2020. The Strategy is aligned with the National Food and Nutrition Security Policy but it offers a more in-depth focus on stunting reduction. As such, NIPN strengthens the existing centralised information system, managed by SESAN, which relies on data from the information systems of different key ministries.

Creation and institutionalisation of the Multisectoral Advisory Committee

As the NIPN positioning was clarified, different options for the creation of the Multisectoral Advisory Committee (MAC) were considered during the six-month design phase of NIPN in 2017. The options were based on a thorough review of the national multisectoral coordination structures led by CATIE (Centro Agronómico Tropical de Investigación y Enseñanza), the implementing partner of the NIPN, which included a review of legal documents and interviews with key government and non-government counterparts. Considering the Guatemala specificities, stakeholders agreed that the MAC should support the existing system and thus be part of the existing food and nutrition security coordination structures. The final decision was to link the MAC to the existing Inter-sectoral Technical Committee (or CTI). The CTI is a technical committee in which all ministries playing a role in food and nutrition security are represented. Though only formed by government representatives, its regulation allows calling upon ad hoc participation of development partners and civil society. The choice for this option aligns with the core principles of the MAC: it is embedded into multisectoral coordination structures, the structure is formalised to ensure members’ continued participation, and it has the flexibility to invite ad hoc participation of experts outside the government. In the legal statutes of the existing committee, CTI is allowed to “create any permanent and temporary committees that it deems necessary to fulfil its functions”. When committees are permanent or integrated “their nature, purpose and organisation must be specified, and the financial resources necessary for its operation shall be indicated”. The MAC is registered as a “Working Committee” under the CTI by law, thus ensuring its institutionalisation and sustainability.

Role of the MAC

The Multisectoral Advisory Committee’s main role is to “support, orient and provide technical inputs to any of the NIPN work streams aiming at strengthening the Centralised Information System for Food and Nutrition Security to fulfil its mandate of tracking progresses of implementation of the National Strategy to Prevent Chronic Malnutrition and understanding the evolution of chronic malnutrition in a coordinated and comprehension approach.”

Specific roles of the committee include:

The Committee is multisectoral and multi-stakeholder by nature: it is composed of representatives from the governmental institutions and all ministries who are part of the Food and Nutrition Security System, typically programme officers in charge of planning, monitoring and evaluation. The full Committee is chaired by the Head of the Planning, Monitoring and Evaluation Division of SESAN. To operate with maximum efficiency, a core group has been constituted from representatives of the four key ministries and institutions responsible for the implementation of the National Strategy to Prevent Chronic Malnutrition: the Ministry of Public Health and Social Assistance; the Ministry of Agriculture, Livestock and Food; the Ministry of Social Development; and the agency in charge of supplying potable water. The Committee will seek the active contribution and participation of representatives from civil society, the private sector and international development partners, since the law permits civil society and partners’ representation in and contribution to CTI committees. The CTI not only provides oversight to the MAC but will also present its findings and recommendations to the decision-making committees of all ministers involved in food and nutrition security. Intermediary outputs and findings of the MAC will be shared with other technical coordination fora, such as the SUN platform, and civil society and donors coordination fora.

As all stakeholders in Guatemala felt it was crucial to formally embed the MAC in the existing food and nutrition security coordination structures, the first six months of the NIPN implementation phase focused on the institutionalisation process (October 2017 to March 2018). This elaborate process offered the MAC the legitimacy and authority to function effectively. The MAC will use the existing formal communication mechanisms between the technical and decision-making levels to create a data-driven policy dialogue. Though it is too early to have evidence, this set-up maximises the probability of influencing policy decisions and sustaining the policy dialogue beyond the duration of the project. The current set-up does not come without challenges. The CTI structure is required to comply with government procedures to call upon meetings and thus may lack the flexibility and reactivity to respond in a timely manner to the NIPN’s needs. Mobilising the full committee, with its large number of government representatives, has proven to be challenging up to now. However, the constitution of the core group – with officially appointed representatives from the four key ministries – offers the flexibility to function in an agile and efficient manner. Since December 2018 the core group has met in specific instances including a first workshop to initiate the process of formulating policy questions.

The way forward for strengthening the sub-national level

The NIPN platform in Guatemala aims for replication at the sub-national level. SESAN has selected one department to study the cost-efficiency of setting up an NIPN platform at the decentralised level, including a departmental MAC.